skip to main | skip to sidebar

Eli is having a little problem at daycare. He has been playing with the babies, which is ok but, he’s been playing a little rough. And by a little rough, I mean he’s been laying on them, choking them, and hitting them. He’s never been around babies before. I’m at a loss. I have no idea how to teach him not to do those things. I tell him every day that he needs to be nice to the babies and not lay on them or hit them. I know he’s not meaning to hurt them. He just wants to play. But he likes to play a little rough sometime. Case in point…

Big John has a black eye courtesy of Eli. They were playing on the bed the other night. Eli was hiding from mommy under the covers. He would come out and yell for me to come back there and find him and then throw his head back under the covers. Well, the last time he did it, instead of throwing his head under the covers, he threw it right into Big John’s eye socket. All I heard was Eli yell “MOMMY!” And then Big John yell “GET BACK HERE RIGHT NOW!” So I ran back there to see Big John holding his eye and moaning. Eli was almost crying because he didn’t know what was going on. So I scooped Eli up and took him in the other room to give Big John time to stop seeing little stars flying around his head. He said it almost knocked him out. This is his second black eye courtesy of Eli. I’ve been lucky so far and have been able to avoid getting one.

So do any of you have any ideas how we can teach Eli to be nice to the babies? His daycare ladies are disciplining him when it happens. But they can’t do much. They can’t spank him or smack his hand. They can just tell him no and out him in time out if they want to. Well, that doesn’t always work with Eli. So, please help me figure this one out.
Posted by bigjohnsgirl No comments:

Eli started preschool last week. Wait… Let me say that again Eli. started. preschool. last. week. Does anyone else see the problem with that statement?? He is not even 2 yet people!! But his daycare does preschool during the day so he gets to do it also. Now don’t get me wrong. I love the fact that he gets to get a head start on learning. I am so glad that she offers it because that’s the only way he would get preschool. But it just makes me sad that my baby is in PRESCHOOL!!

It’s so much fun though. He has a school binder that we get to bring home every night and see what all he did that day. So far, he has worked on the letters A and B, and the colors red, yellow, and brown. He can identify an apple (because A is for apple). He can identify the letter B but not the letter A yet. But the first thing that he learned really made me cry. But I have to tell you the whole story first.

I thought his preschool started on Sept. 20. So on the 13th, I got home from work and we decided that we were going to grill out for supper. Big John had to go down to the store and get some charcoal. So that left just Eli and me at home. I had to go to the bathroom and since I can’t ever go to the bathroom by myself anymore, Eli was in the room also. Our bath mat has 6 big squares with a big flower in the center of each one. Eli was on the floor pointing to all the flowers and saying “flor”. Then I heard him saying something else so I listened really hard. He was pointing to each square and saying “One, Two, Tree, Four, Fye, Sis, Seben, Ate, Nine, Ten!! I almost fell off of the toilet!! I was so excited and I couldn’t wait to tell Big John.

By the time Big John got home, I had convinced myself that I was just hearing things. He didn’t really count to ten by himself. That was crazy!! We hadn’t even started teaching him that. So I told John about it but said that I thought I was hearing things. So later on, Eli was sitting with Big John and we had just got done reading Goodnight Moon for the 1,467,917 time. Eli likes to “read” it to us so Big John gave him the book. He started pointing to things on the pages and counting them. I started crying and made sure John knew what he was saying. It was so amazing!! I couldn’t believe that my baby was counting all by himself. That’s when Big John decided to tell me that I was wrong about the start date of preschool. It had started that morning. He learned to count in one day! My little man is so smart!!! I can’t wait to see what he has learned by Christmas!
Posted by bigjohnsgirl No comments:

You know, I thought getting back into working would be a lot easier than it has been. It’s been over a month and I still don’t think my body has adjusted yet. I am always tired and we go to bed before most 9 year olds do. I don’t understand it. And I hate it. I just want to sleep in every day like I was before. But I get to, no make that have to be a responsible adult and bring home some money so we don’t end up on the streets. Ok, it wasn’t actually that bad. But it is really nice to have some money left over to do some fun things with.

For example, this past weekend, Big John and I dumped the kid off at my brother’s house for a sleep over with my nephews. We went and played bingo on Friday and we both walked out a winner!! Then Saturday morning we got up and traveled around Indiana all day hitting up some wineries. We made it to four different ones. It was so awesome!! To think, these places actually give you tons of wine to sample for free!! I can’t believe we haven’t done this before. And one of them that we went to if you help them pick the grapes, they pay you in wine. Let me say that again. THEY PAY YOU IN WINE. I am quitting my job right now.

We really did have a great time together. It’s been a long time since we’ve been able to do anything like that. Our marriage needed it. Not that things were bad. Because surprisingly, they weren’t. I was so afraid that our money issues would start to cause a problem between us. But I think it actually brought us closer. I think it’s because of all the time we spent together at home as a family. We didn’t have the money to go and do things so we made being at home fun. But that isn’t to say that we didn’t wish that we could have a night out. I think every married couple with kids needs a date night every once in a while. We are going to hopefully make this a regular thing. So what do you and your significant other do on date nights?
Posted by bigjohnsgirl No comments:

I am not dead… I did not fall of the face of the earth… I did not run off and join the circus (although I thought about it a few times.)

So what happened to me, you ask? Well, the only answer I can give is life. Life happened. A job was lost. I became a stay at home mom for 10 months. It was 10 long, short, blissful, frustrating, happy, sad, maddening, humbling months. Eli has changed so much and as a result, so have I. I have so much admiration for women that are stay at home moms now. I did it for only 10 months. Those of you that do it for your child’s entire childhood deserve some recognition. Too many people don’t realize how hard it is to be a mom day in and day out with no break, no time for yourself, and no help. Heck, I couldn’t even pee by myself. But on the plus side of that, Eli now knows how to use toilet paper.

Eli is now 20 months old going on 14. He has an attitude (which Big John says he gets from me. I still am not convinced…). He is a little dare devil. He likes to fling himself off of various pieces of furniture and then laugh when I freak out. He usually has to do things all by himself. But when he gets frustrated with trying to do something, he will let me and everyone in the neighborhood know about it. He is very smart and picks up on things so quickly. Some things we wish he wouldn’t pick up on… But for the most part we are so proud of everything he has learned. I did Mommy School with him almost every day. We would work on a different skill and read lots of books. He loves to read which excites me so much as I am an avid reader also.

He loves to swim. My parents have a pool and he was in it quite a few times this summer. The last time he was in it he was swimming by himself using just arm floaties!! He is going to be a little fish just like his daddy is.

Well, I promise it won’t be so long in between posts from now on. I will post some more recent pictures of Eli soon also.
Posted by bigjohnsgirl No comments:

Wow lot's of things have happened in the last month! We have been so busy lately! I can't believe that it's almost July. Which also means it's almost my birthday!!! I'm like a little kid about my b-day. I get so excited and giddy as it gets closer! It doesn't help that every year we have a huge bash to celebrate. But that's because my mother-in-law and brother-in-law also share my birthday. Yeah we all have the same birthday! Big John always remembers it though...

Eli has had a big month also. He is six months old now.
Posted by bigjohnsgirl 4 comments: 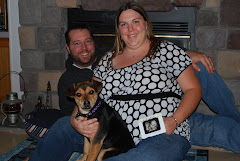 Big John, me, Eli, and Alli

They really love me!!!

What I read daily

Check out this site!